The very wise Alan Watts breaks down what's wrong with the world at large, and does so back in 1970! His foreshadowing of the manipulation of the food supply through high yield crops is eery and so very true (i.e., Monsanto and their Ready Roundup crops).

He proposes a number of things we can do to change our attitudes towards life and the planet. I'm sorry to say he would be greatly disappointed if he were alive today, however we still have a chance to set things right and fulfill Watts' dream of unity, peace, and love.

Alan Watts sums up his feelings in this short clip from 'Conversations with Myself'. "And we may have to come to the alarming conclusion, that the Universe is smarter than we are." - Alan Watts 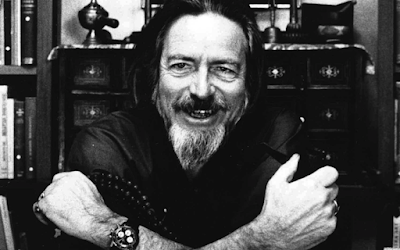 Alan Watts was born in London in January of 1915 at the start of the first World War. At a young age he became fascinated with the arts of the Far East, and by the time he was ten or eleven he began to read thriller stories by Sax Rohmer about about mysterious Oriental villains. This interest led him in turn to the works of Lafcadio Hern, Christmas Humphreys, and DT Suzuki, and by fourteen was writing on Eastern themes, and was published in the Journal of the London Buddhist Lodge before producing his first booklet on Zen in 1932. He moved to New York in 1938 and then to Chicago where he served as an Episcopal priest for six years before leaving the Church. In 1950 he moved to upstate New York, and in late 1950 visited with Joseph Campbell and, composer John Cage, and Luisa Commaraswamy at his Millbrook farmhouse. Then in 1951 at the invitation of Frederic Spiegelberg he moved to San Francisco to teach at the Academy of Asian Studies.

Alan Watts was profoundly influenced by the East Indian philosophies of Vedanta and Buddhism, and by Taoist thought, which is reflected in Zen poetry and the arts of China and Japan. After leaving the Church he never became a member of another organized religion, although he wrote and spoke extensively about Zen Buddhism, Hinduism, and Taoisim. Some American Buddhists criticized him for not sitting regularly in zazen, even though he recorded several guided meditations teaching a variety of mediation techniques. Alan Watts responded simply by saying: “A cat sits until it is done sitting, and then gets up, stretches, and walks away.”

After teaching at the Academy of Asian Studies in San Francisco he became Dean, and began to give regular radio talks on KPFA, the Berkeley free radio station. In 1957 he published his bestselling Way of Zen, and in 1958 returned to Europe where he met with CG Jung. He was an early subject in pioneering psychedelic trials, and after recording two seasons of the public television series “Eastern Wisdom and Modern Life” traveled to Japan several times in the early sixties. By the late sixties he had become a counter culture celebrity, and traveled widely to speak at universities and growth centers across the US and Europe.

By the early seventies Alan Watts had become a foremost interpreter of Eastern thought for the West, and was widely published in periodicals including Earth, Elle, Playboy, and Redbook. He appeared on CBS television’s Camera Three in 1969, and in 1971 he recorded a pilot for a new show titled “A Conversation with Myself” for NET, the precursor to PBS. When the series was not produced he recorded the shows in 1972 with his son Mark and his long-time audio archivist Henry Jacobs. Overall Alan Watts developed an extensive audio library of nearly 400 talks and wrote more than 25 books during his lifetime, including his final volume, Tao; the Watercourse Way. Alan died in his sleep in November of 1973 after returning from an intensive international lecture tour.